Cardona’s best work, every piece fluid and quick, yet determined to probe the aching absence and locate the reassurance that remains. Language is a major ingredient of her alchemy for immortality.

A bilingual collection in English & French

One of the most remarkable things about this remarkable book is its utter strangeness…. Not the confessional “I,” not the “I” of personal expression, not even, finally, the mythic “I,” but an explosive secular mysticism is what this book is after. At times it leaves us—deliberately—almost breathless, no longer quite “alive” but not dead either: la vie suspendue.

You listen to the silence
drawn on the ashes of ancient sacrifices.

Praise for Life in Suspension

Hélène Cardona has delivered to us a book in which she celebrates the magic of parallel worlds. Two languages, two persons, one testimony. Not so much a disclosure of truth, as much as the revelation of doubt. What sways above the emptiness is a life lived in complete awe. Cardona balances over a cosmos of fragments. The sparkling, the reflections do not throw back a perfect mirror image. Lives are shared, not possessed. The result is a song for the acceptance of doubleness, pluralism. Hélène Cardona provides synthesis for what is inevitably separated.

Traces of melancholy, flashes of resilience and above all, an abundance of wonder – at things both quotidian and cosmic, past and present – shine through Life in Suspension.  A magical collection of poetry that will enrich the reader. Profound in thought, assured in tone, it artfully makes references to several great minds of the East and the West – Rumi and Hafiz, E. E. Cummings and Carl Sagan.

—Tulika Bahadur, On Art and Aesthetics

Hélène Cardona’s poems sing to the spirit of things and to the things of Spirit. Each delicious word and sentence is worth savoring, and makes a feast for the soul. A compelling read. I could not put it down!

The poems which move me most twist time and like the best esquisses and in a few lines tell a story.  Read Hélène Cardona’s “In Search of Benevolent Immortality”.  Mysterious but also so familiar, especially to anyone who has crossed borders.

On the wall of time to come
a window appears.
I open it, let angels in.

Reviews of Life in Suspension

Review by Elizabeth Cohen in At the Inkewell

Review by Anomaly in Books To Watch Out For 2017

Review by Elvis Alves in the Compulsive Reader

Review by Anthony DiMatteo in The Los Angeles Review

Celebrating American She-Poets: Hélène Cardona by Jamie Dedes in The Poet by Day

A Poet is a Mood by J.C. Hallman in The Brooklyn Rail

Life in Suspension by Guy Sangster-Adams in The Cultural Pick

Life in Suspension by Karli Cude in Typographical Era

A Lyrical Search by Hugh Hazelton 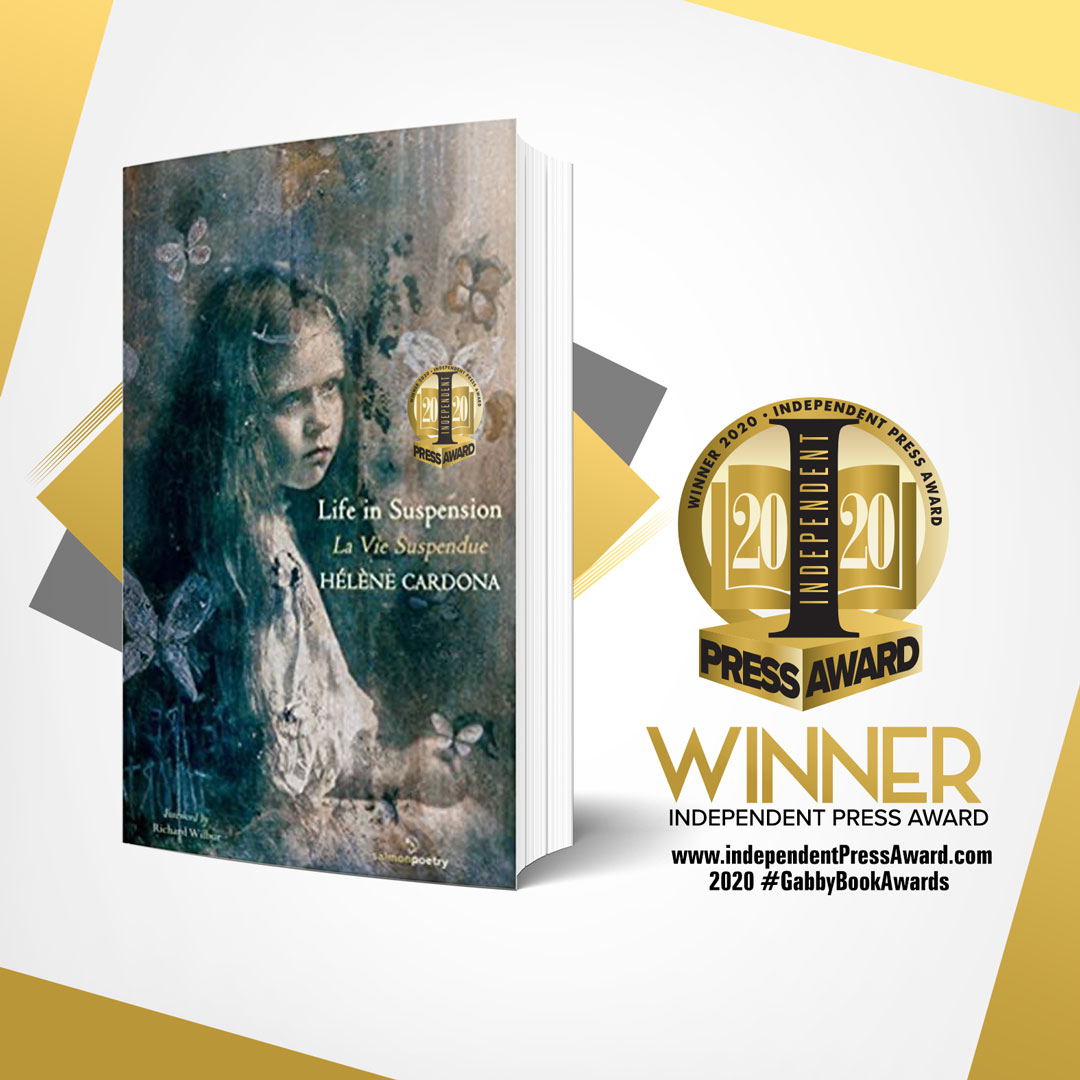